Zero to Hero’s Day 4 challenge: Explore the Neighborhood, as intended, motivated me to check out and follow a handful of blogs that I hope will be interesting and inspiring. But it also got me thinking of all of the wonderfully quirky, and sometimes truly insane, “real” neighbors I’ve had over the years.

The Nutty Professor
One of my current neighbors is an 80ish-year-old retired teacher who’s losing his hearing. He insisted on inviting me into his home to show off his self-planned and -designed house after I helped him clear a fallen tree from his driveway.

The very loudly narrated grand tour included a lovely open-plan kitchen/living room space (where he hosts several well-attended parties each year), a king-sized four-poster bed and a walk-in glass-block shower that overlooks his courtyard (I don’t want to think about what types of entertaining he does there).

I must admit that several times I questioned whether he might bop me over the head and transport us into some creepy Lifetime movie, but he didn’t. Instead, he simply sent me on my way with an Japanese eggplant from his garden. A tasty thank you for being neighborly. 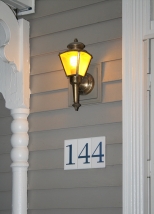 An old neighbor from the former-home-turned-funeral-home-turned-apartment-building that I lived in up in Northern Maine. This lovable, but alcoholic, Scottish-accented neighbor stumbled into my first-floor apartment several times thinking he was home (which is a little weird considering he lived upstairs, but whatever).

I had become accustomed to the regional tradition of leaving my doors unlocked (low crime rate), but after several unannounced, beer-hazed entrances by Spuds, I reinstated the lock and chose to ignore the occasional rattlings of the door knob. (A link for those who don’t understand the Spuds MacKenzie reference)

The Nearly Naked Neighbor
I encountered this odd gem and his live-in girlfriend as I was moving into my first home in Northern Maine. The fact that the “apartment complex” was a renovated sanatorium was probably foreshadowing.

Anyway, he happened to be from my hometown of Gainesville, Florida, which made my mother very excited, and both he and his girlfriend promised her to “look out for me.” And they did…for a few months.

Fast forward to January. It was a Friday night. I was chatting on the phone with my father before I headed out for the evening. I hear a knock, tell my father to hold on, and open the door.

“Well, you aren’t wearing any pants!”

There, standing before me in 20-degree weather, is my neighbor. He’s bare-chested, wearing an unzipped ski jacket, boots and ill-fitting boxers. Immediately assessing the situation, I assumed the building must be on fire and exclaimed, “Oh my goodness. What’s wrong?”

“Well, you aren’t wearing any pants,” I stated questioningly.

He stared blankly at me. I paused for two beats. No change.

“Noooo,” my father exclaimed overhearing the exchange, as I hung up the phone still assuming there was some kind of unseen emergency.

I was wrong. Dad was right. Not an emergency. Just a drunk neighbor.

Nearly Naked Neighbor then proceeded to push his way into my home and tell me all of the ills he felt his girlfriend, who was out of town, had done to him and how cool he thought I was.

About 30 awkward minutes later, I was able to escort (shove) him out of my apartment, call my father to let him know I’d survived, and then head out with a bizarre story in tow to share with my friends. Needless to say, our neighborly relationship ended after that night…well, almost.

Several years later, after I moved back to Gainesville to care for my parents, Nearly Naked Neighbor called me. He was still living up north and had tracked me down (my number was unpublished) by calling my father and convincing him that it was an emergency.

Nearly Naked Neighbor then shared with me some grand conspiracy that was happening in the area and declared that I needed to come back (I had been a TV reporter up there) and expose it (pun intended).

So after patiently listening to him, I hung up, called my father, laughingly explained that the man who had called him was Nearly Naked Neighbor, and made my dad promise to never give out my number again.

The Fill-in-the-Blank Neighbors to Come
Thinking about these and other interesting characters, who literally have been my neighbors, made me cautiously excited about the virtual neighbors that I might encounter moving forward.

8 thoughts on “Tale of a Nearly Naked Neighbor”

© Awkward Laughter, 2013-2014. Unauthorized use and/or duplication of this material without express and written permission from this blog’s author and/or owner is strictly prohibited. Excerpts and links may be used, provided that full and clear credit is given to Awkward Laughter with appropriate and specific direction to the original content.
%d bloggers like this: