A woman from the lower-eastern U.S. speaking broken French sounds about as poetic as Dr. Suess in Swahili. Those were my initial thoughts after learning that I had the chance to go to Paris for the first time.

Nonetheless, I was determined to take advantage of my work trip to the UK and to make a detour to France, the homeland of my paternal grandmother’s family.

The question was never whether to go but what I needed to do to prepare. So I did what any stupid southerner with a smartphone would do…I downloaded some apps to get a crash course in the language.

Here We Go, Y’all
My first attempt at French actually came about five years ago. I was planning a trip overseas and wanted to embrace the language of my forefathers. I signed up for community ed class. Big mistake!

The teacher, for whatever reason, hated me on sight. For the next eight weeks, she reveled in putting me on the spot and listening to me stumble over basic phrases. While I stuck with the course until the end, on the last night a classmate turned to me and said: “I don’t know how or why you are still here, but good for you.”

Needless to say, I didn’t emerge fluent in French.That vacaction got postponed indefinitely as did my attempts to learn the language. Fast forward to December 2013.

Let the Training Begin
Crunch time resulted in me downloading: Learn French by Codegent and SpeakEasy French by Pocket Glow. I settled on the latter because I liked that it provided the English phrase, the French translation, the phonetic spelling and an audio version that you could play fast or slow.

For the next 20+ days, I relentlessly reviewed phrases that I thought I would use most on my trip. “How are you?” “What is your name?” “Where are you from?” “Where is the bathroom?”

I played and repeated them every chance I got. In the car, during work breaks, and, yes, on the toilet. I wanted to be the proverbial boy scout…always prepared.

Landing in Paris
My first attempt at speaking was an epic failure. The cab driver pulled up to the curb, jumped out, yelled at the airport attendant for not being present when he arrived, and then turned to me.

Instead of good evening, I muttered good day. Instead of saying “I need to go to hotel Cambronne,” I mumbled something incoherent. I wasn’t speaking French; I was speaking in tongues.

I resolved our impasse by pointing at an address on my phone and hoped he’d take me there. After numerous detours and a large taxi fare, he did.

Let’s Try this Again
Given my first experience, I wasn’t exactly anxious to get out of bed and explore the city. But I’m so glad I did.

What followed over the next four days was life transforming. Delightful interactions with people from all over the world (see A Hotel by Any Other Name) and with locals that made me question why the French got the reputation that they didn’t like tourists (and Americans in particular).

Finding my Voice
While I continued to butcher the language, I improved with each iteration, and I dedicated my trip to becoming less offensive encounter-by-encounter.

Sabrina and Boris were, hands down, my favorite locals. They work at La Gauloise (a yummy restaurant that serves French comfort food). Both played along with my sometimes futile attempts to speak French, and Sabrina was an all-to-willing participant in my desire to capture the appalled reactions to my twangy delivery.

More often than not, I found the French happy to help a less-than-fluent gal out. They laughed with and at me, no doubt, but they also appreciated my attempts to speak their language and my apologies when I failed.

When I determined my “au revoir” produced a drunken-pirate sound, I switched to “bonne journée” and “bonne soirée” to say farewell. I become an expert at “Je suis désolé” and donning my forgive-me-I’m-an-idiot face. Those, plus plenty of “merci beaucoups” saved me.

Beyond the Basics
I soon discovered that while I had mastered many phrases to navigate the city, I lacked the vocabulary to adequately express my joy at being there and my gratitude for the patient courtesies that the city’s hosts extended me.

Upon finishing a delicious dinner, Boris asked “How was it?” I replied, in English, “Oh my goodness, that was one of the most amazing meals I’ve ever eaten!” and went on to explain why.

He then asked, “And in French this time?” I could only respond, “C’était délicieux!” He applauded me, but those words hardly seemed adequate.

Referring back to my trusty app I discovered that it not only didn’t have better descriptors for food, it couldn’t even guide me on how to say “This is beautiful.” It did, however, have an entire section dedicated to dating: 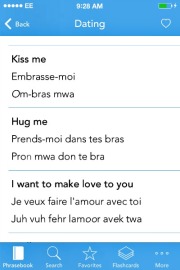 One could argue that had I perfected any of those sayings, I wouldn’t have needed other words. But alas, I didn’t nor did I want to. What I wanted was a more-robust lexicon!

And that’s when it hit me why I have struggled so much with learning Spanish, French or any other language. As a person who prides herself in turning a phrase and always having the right word for the moment, I hated the limitations of communicating in a non-native language. I mean, the 3-year-old girl who gave me the stink-eye on my last day was more eloquent than I – a humbling realization.

France Revisited
While I’m never going to think that my southern accent and the French language go hand in hand, the people, sights, and culture inspired me. I hope to visit the Metz region where my family is from, and to return with a less-timid approach to exploring the country and a whole new set of expressions to share my experiences.

And who knows? Perhaps next time I will put “Embrasse-moi” to work. There’s gotta be a reason why they call it a French kiss, right?

What experiences have you had in traveling to a country where you weren’t fluent in the language? Did you try to speak it anyway? What reactions did you get from the locals?

© Awkward Laughter, 2013-2014. Unauthorized use and/or duplication of this material without express and written permission from this blog’s author and/or owner is strictly prohibited. Excerpts and links may be used, provided that full and clear credit is given to Awkward Laughter with appropriate and specific direction to the original content.
%d bloggers like this: