Cooties, schmooties. From birth, I thought boys were fantastic!

To my four-year-old girl friends who thought otherwise…well, I don’t understand your reluctance. Boys were awesome! (Unless you were gay. Then I completely understand, though I didn’t at the time.)

Peter was my first boyfriend. It was a pre-school kind of infatuation – the kind most would quickly dismiss. But not I.

He was the Goldar to my Silvar (a bad but popular 1970s’ reference to Space Giants).

While I might now balk now at his 50-foot, lion-haired Goldar character and my meek, metallic Silvar, at the time we reveled in our roles. We zoomed around the playground, pretending we were rockets saving the world from evil.

Peter hung the stars and the moon as far as I was concerned.

Our Presbyterian pre-school was spiritual, but when he joined my 4th birthday party, I don’t think we focused on God.

Surrounded by friends and family, my mind centered on my crush and he on me, so much so that my mother snapped this photo of our innocent relationship in action, ignoring everyone else for the moment. 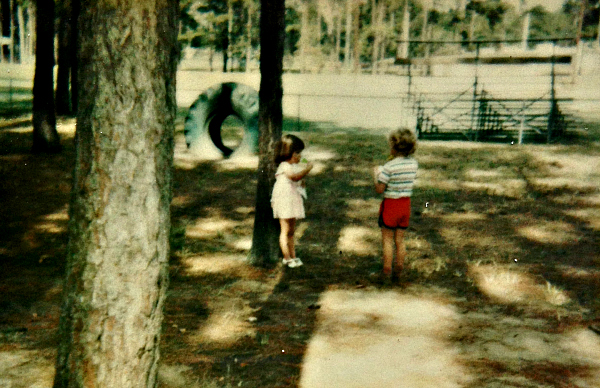 But pictures taken that day go beyond that. These Polaroids portray two pre-schoolers holding hands as I make a wish on my cake and our basking in his gifts, books and a MASH doctor doll. 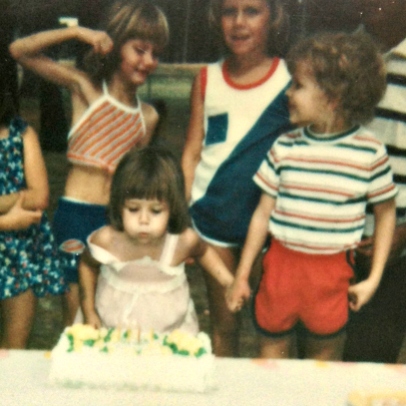 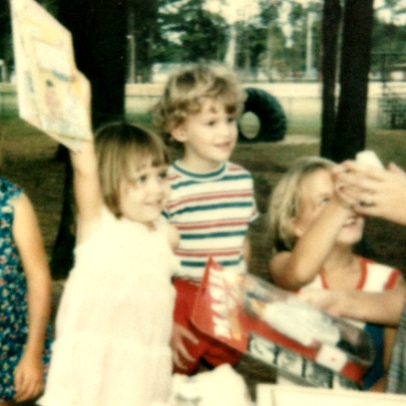 Thirty-plus years later, it would be easy for me be snarky, as is often my nature.

While I’ve long since stopped celebrating Valentine’s Day (as my friend Kristen eloquently captured why), I haven’t quit celebrating romance.

But who knows? What do you think?

20 thoughts on “Falling in Love at 4 Years Old”

© Awkward Laughter, 2013-2014. Unauthorized use and/or duplication of this material without express and written permission from this blog’s author and/or owner is strictly prohibited. Excerpts and links may be used, provided that full and clear credit is given to Awkward Laughter with appropriate and specific direction to the original content.
Loading Comments...
%d bloggers like this: