“What are you looking at you, green-eyed heifer, you?”

That’s what my father asked me. He’d said similar things to my sisters but swapped green-eyed for blue-eyed, brown-eyed or the all-encompassing big-eyed heifer.

He conveyed those words with such loving affection that my sisters and I didn’t realize, until way too late in life, that he was actually calling us cows.

This is how we roll in the South – lots of nicknames and random reasons behind them. Question any of them and you’re a damn Yankee!

But while there’s a regional influence at play here, I can’t help but feel my dad took this tradition to another level.

Thanks to him, his brother David became “Hugh Baby” based on his middle name, Hughes. My extended family called my Uncle Ernie, “Uncle Toot” without question nor explanation. He dubbed my cousin Jill: “Jill Dinks,” no clue why. My sister Lana went from “Lana Banana” to “Banana Tree” to just “Tree” before the age of six. 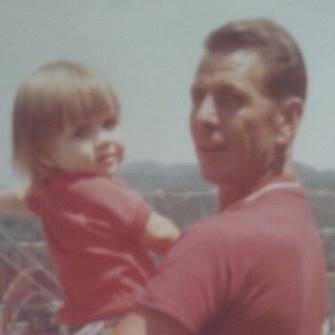 I, having a less rhymey name but a lot of gas as a child, acquired the moniker “Fart Blossom,” but only as an alternative to “Short, Fat Fanny,” which I earned after coming out of my mom as a 10-pound baby with a big head, short stature and chubby cheeks.

He got plenty of quizzical looks when he continued to call me either of those names long after I grew up to be a thin, 5’6”, less-flatulent adult. Oddly enough, I never cringed nor over thought the meaning of the individual words. I knew the sentiments behind them and just smiled and answered.

I think part of Dad’s proclivity for pet names arose out of old-school southern men’s prevailing aversion to stating their love for anyone outright. The rest probably stemmed from the fact that he enjoyed a good turn of phrase.

Two of his favorites:

“You (I) need to get your (my) sh*t together in a brown-paper bag and keep the bottom dry.”

(Translation: All is well even when it doesn’t seem that way in the moment.)

My father didn’t just make those remarks when his business was doing well and he sold house after house. He said them when he was nearly broke and wondering how to pay the family’s bills and turn his business around.

As a teen and into my twenties, I rolled my eyes in response countless times. Who’s he kidding, I wondered?

Just like my eureka moment about his “_____-eyed” heifer nicknames, my understanding of dad’s philosophy clicked later in life.

He was an eternal optimist. He certainly had many shortcomings, which I won’t go into here, but I’ve come to believe that him choosing to focus on the bright side of life most of the time wasn’t one of them.

And I’m grateful that his genes and influence dictate that I do too:

How about you? Do you have any familial nicknames, sentiments or traditions that drove you crazy as a child but you’ve grown to embrace?

(This post is one of 30 30-somethings I’m writing for the weekly countdown to my 40th birthday. Celebrate with me as I share other lessons or humbling experiences from the past decade. WordPress also inspired it, in part, by its Daily Prompt:Modern Families.)

© Awkward Laughter, 2013-2014. Unauthorized use and/or duplication of this material without express and written permission from this blog’s author and/or owner is strictly prohibited. Excerpts and links may be used, provided that full and clear credit is given to Awkward Laughter with appropriate and specific direction to the original content.
Loading Comments...
%d bloggers like this: